The Novodevichy Convent is one of the most appreciated historical sites by Muscovites and a must-see if you travel to Moscow. Next to the convent is the Novodevichy Cemetery, the most famous of Moscow and in which famous celebrities of Russian history are buried, such as former Russian President Boris Yeltsin, film director Sergei Eisenstein, or composer Dmitri Shostakovich, among others. 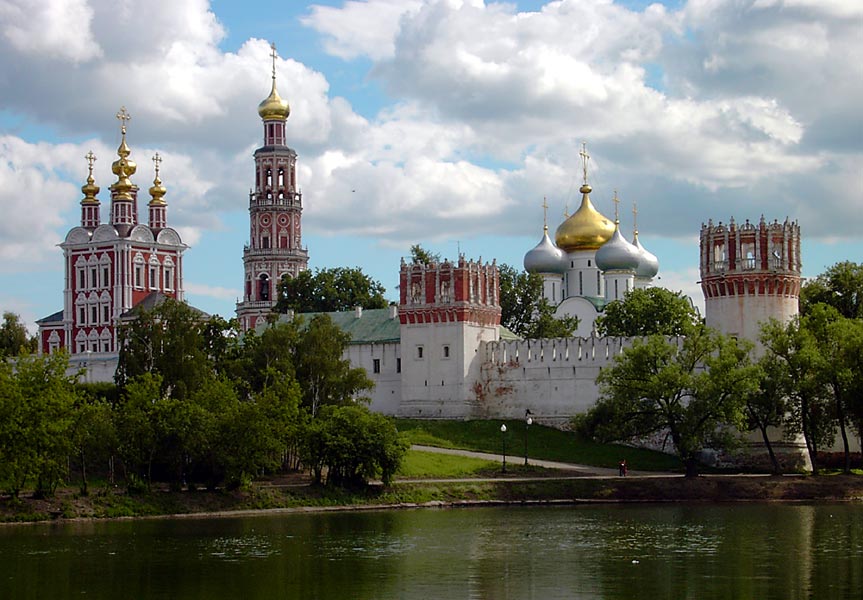 The Novodevichy Convent (or Monastery), or Novodevichy Convent Complex, is a complex of walled religious buildings that dates back to the early 16th century, and that you can’t miss in your visit to Moscow. It is located in the southwest of the capital, next to the Moskva River. It is one of my favorite places in Moscow, for its tranquility and its history.

Next to it is the Novodevichy Cemetery, the most famous in Moscow, whose visit is even more interesting than that of the convent, since famous figures of Russian history are buried there, and tombs and mausoleums are authentic works of art.

The entire complex, of Russian Baroque style, has undergone important changes since its inception and has been a direct testimony of the history of Russia, the Russian Empire and the Soviet Union, reaching our modern days with the declaration of the Novodevichy Convent as a World Heritage Site by UNESCO in 2014.

In addition, outside the high masonry walls, there is a park, the Moskva River and a small lake, which was immortalized by Tchaikovsky in The Swan Lake, from which we see the financial district of Moscow City in the distance, with its modern skyscrapers. 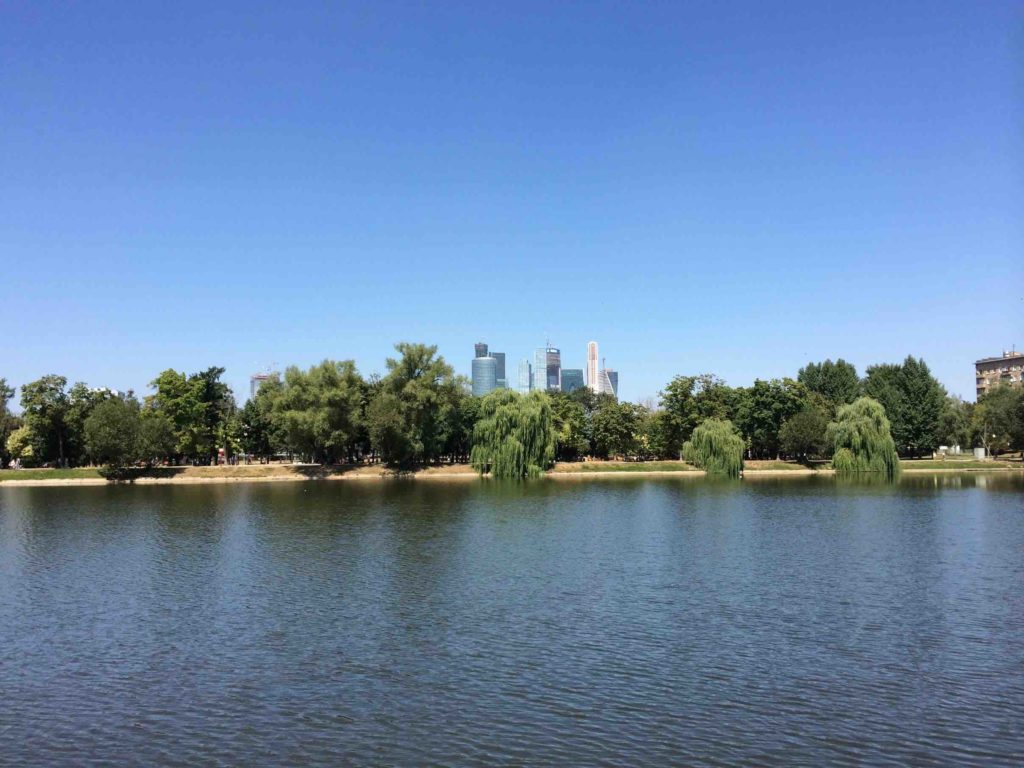 The visit to the convent, including the cemetery, may take you one morning. Near Novodevichy there is the modern and refurbished Great Sports Stadium of the Luzhniki Olympic Complex, which was the main venue for the 1980 Moscow Olympics and the 2018 World Football Championship, in case you want to complete your morning or day visit schedule.

2. Basic Information: hours, prices, visits, restaurants and how to get there

The visit to the Novodevichy convent complex and the cemetery, as I said, can take you the whole morning, though everything depends on the rhythm of each one and the exhibitions that are visited. Keep in mind that the complex is in continuous remodeling and it is easy to find some churches or exhibitions of the complex closed or under construction. 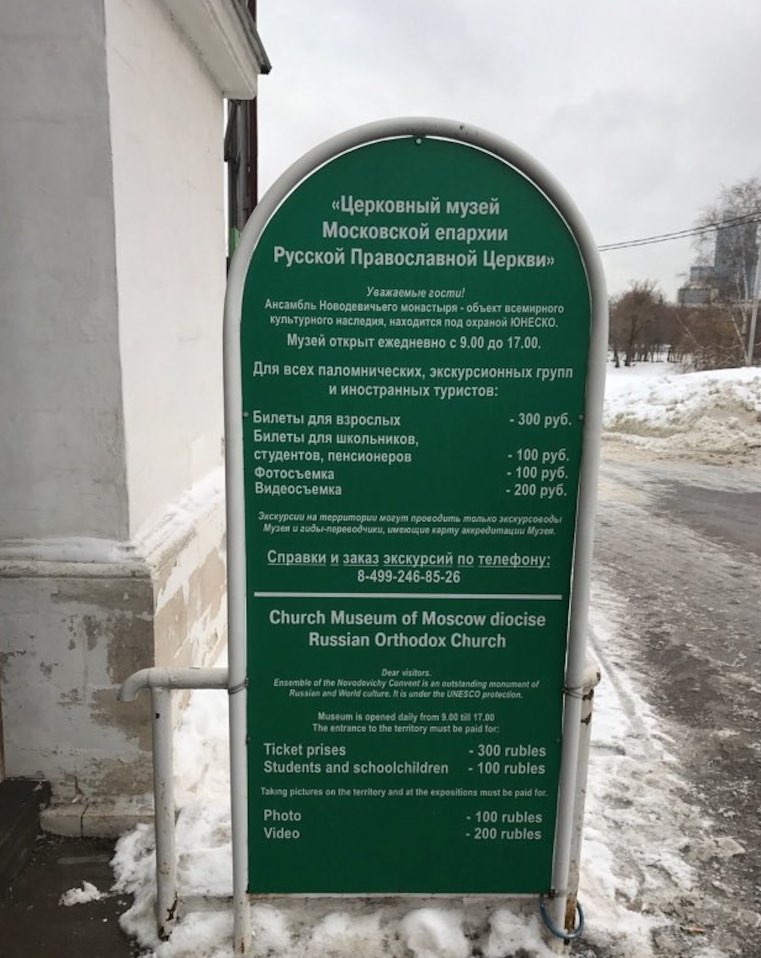 In the vicinity of the monastery (or convent) there are several restaurants of elaborate cuisine: Givisatsivi, Khinkalnaya (Georgian food) and Golubka (Italian and Russian cuisine). If you prefer, there’s also a Russian fast food place from the restaurant chain Kroshka Kartoshka.

Apart from being one of the most beautiful religious complexes in Russia, the Novodevichy Convent has its own history, linked to the royal dynasties, which goes back to the Tsars, until its current management by the Russian Orthodox Church in 2010. I will try to make a small summary. If you want more information, there is an official guide (though it is in Russian) about the history of the convent until today. You can download it in this link. 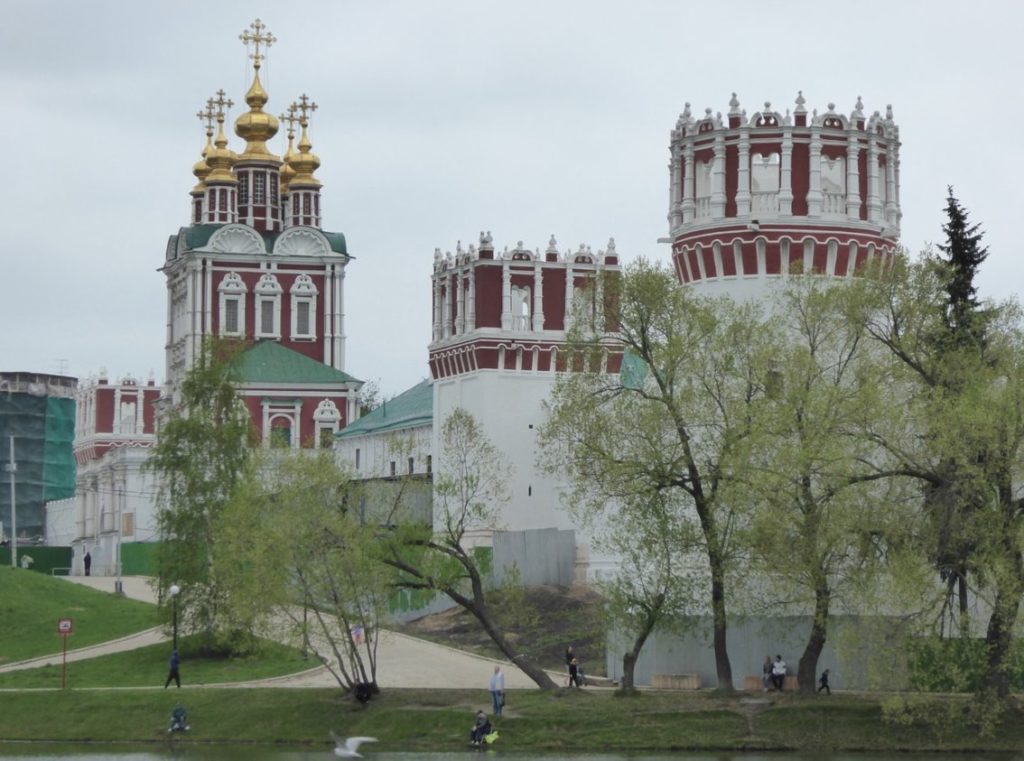 The origins of the Novodevichy Convent are located in 1524, at the time of the Great Prince Basil III, then called the Monastery of the New Maidens and after 1514, after the two Russian-Lithuanian wars, Smolensk was annexed to Russia. The new monastery served as a historic tribute to this event. However, during the siege of Moscow (1610-1612) it was devastated. Subsequently, the first Romanov czars restored it completely.

But undoubtedly one of its historical figures was the princess and regent of Russia (from 1682 to 1689) Sofia Alekseyevna, who died in Novodevichy in 1704, where she was forced to retire after strong disputes in court. She became a nun and is buried in the same Smolensk Cathedral. 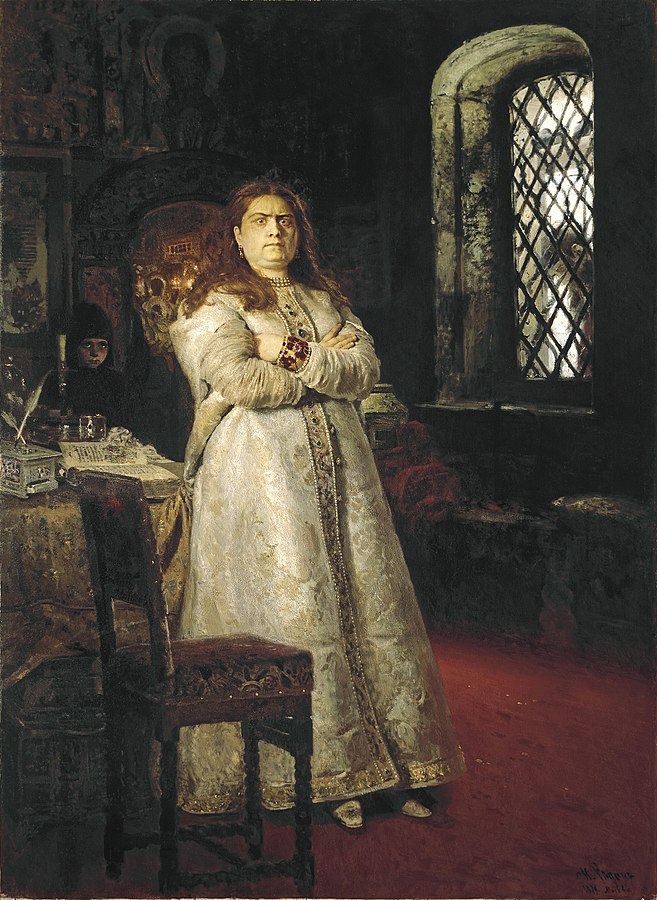 During her regency the architectural group of the Convent was improved with the construction of three important churches, the bell tower, a refectory and several chambers. It was one of the times of flourishing of the complex.

Another notable episode occurred in 1812, when the French Napoleonic troops occupied the convent and wanted to destroy with gunpowder the Cathedral of Smolensk and the Church of the Assumption. It seems that the explosion was avoided by the nuns.

In the 18th century, Novodevichy was a monastery that dedicated great efforts to charitable activity for orphaned girls, there was even a hospital and two asylums for old nuns. In addition, there were significant restoration works. Later the new cemetery was planned, outside the walls and the foundations of the current one.

After the October Revolution of 1917, ecclesiastical property was confiscated and in 1922, the Bolsheviks abolished the monastery and later the Church of the Assumption was closed in 1929, where there were still sisters living there. Later, towards the middle of the 20th century, the Convent and its churches were recovered for courses, services and religious uses.

In 1994, the monastic life resumed and the nuns returned. In 2004, the architectural ensemble was declared a World Heritage Site by UNESCO. In addition, in 2010, the Russian Government transferred the use of the complex indefinitely to the Diocese of Moscow of the Russian Orthodox Church.

In 2016, the Bank of Russia issued coins of 50 rubles (made of silver and gold) dedicated to the monastery. The Novodevichy Convent will celebrate its 500th anniversary in 2024, for which there will be institutional aids, works and improvements in the complex. 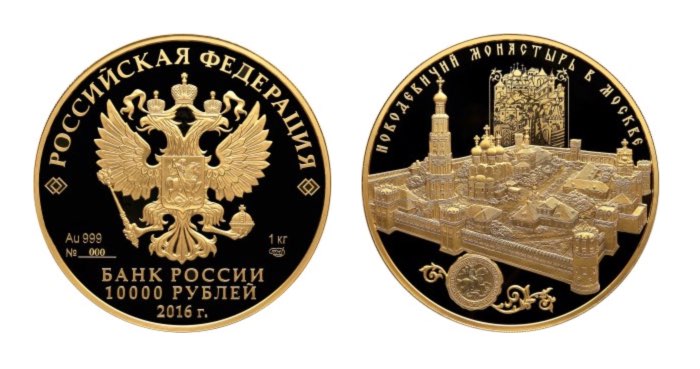 4. What to see in the Novodevichy Convent

Within the walls of this magnificent artistic complex, it is very worth seeing or visiting the following religious buildings, with the caveat that some may be open only in summer and also that some of them may be undergoing restoration work. 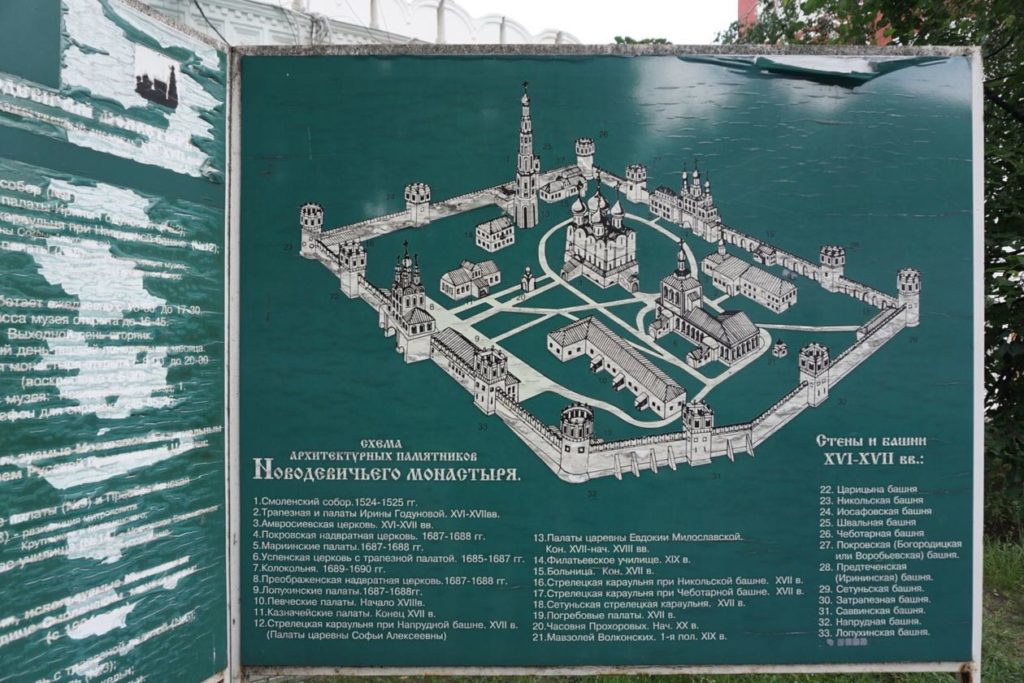 Here you have a panoramic view of the entrance to the Novodevichy Convent, with the Church of the Transfiguration:

Therefore, in the enclosure you can see: 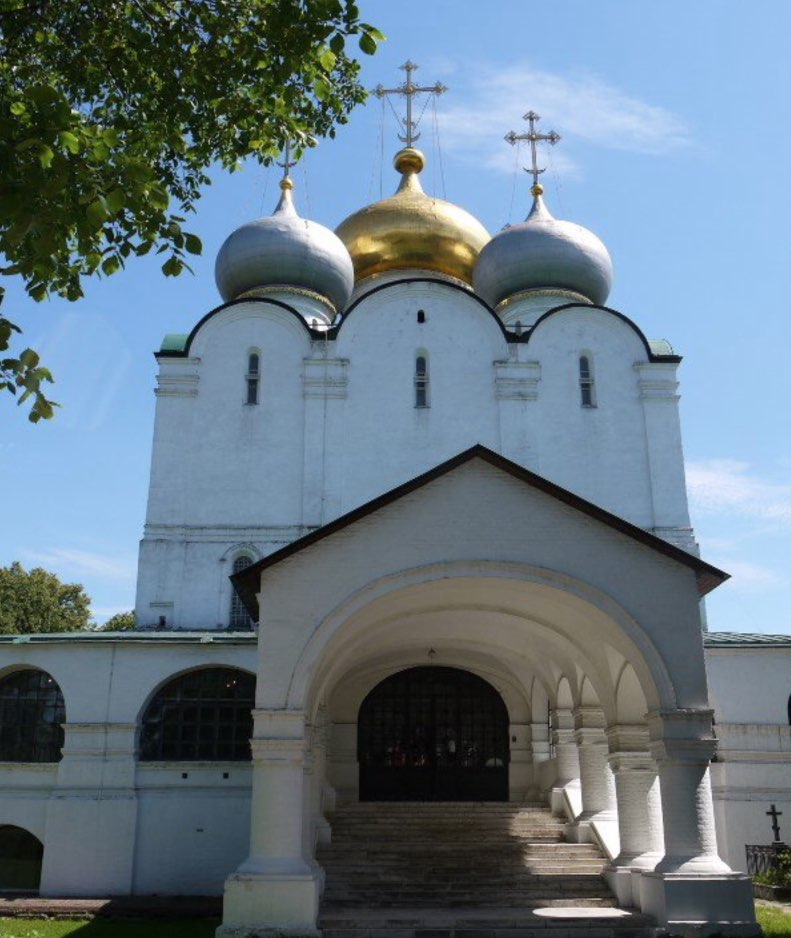 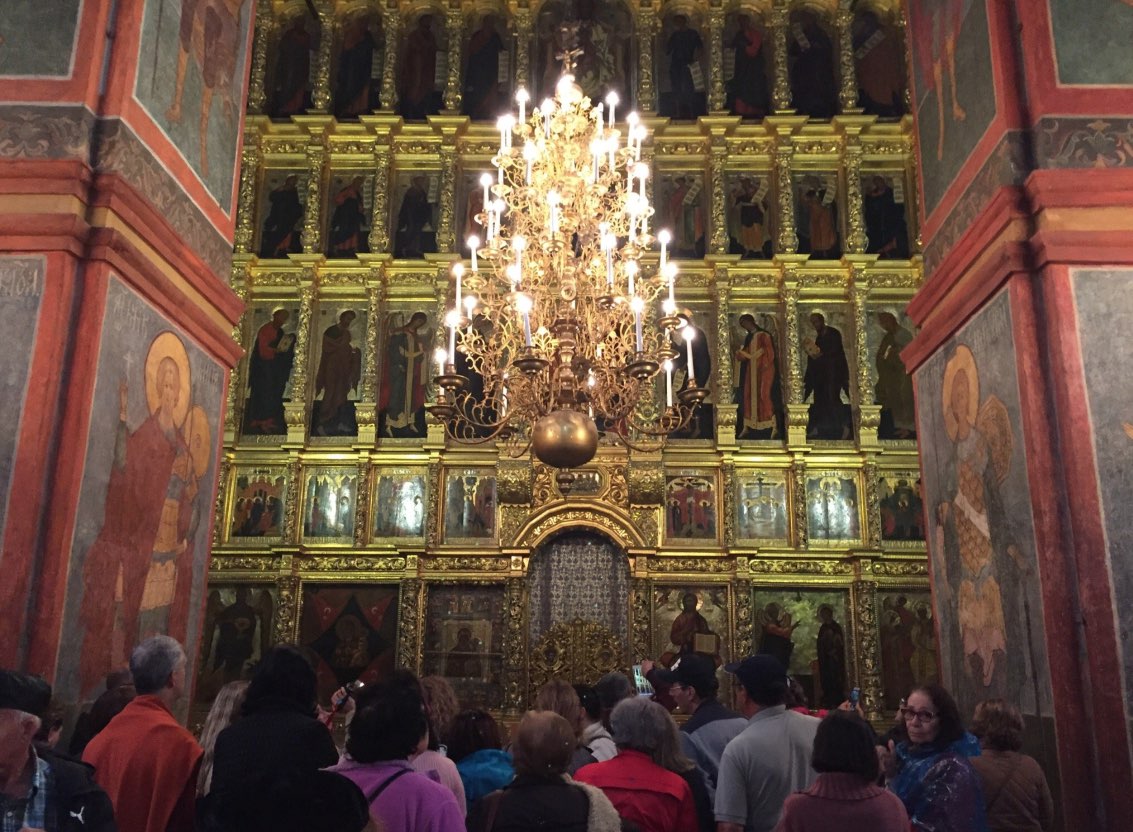 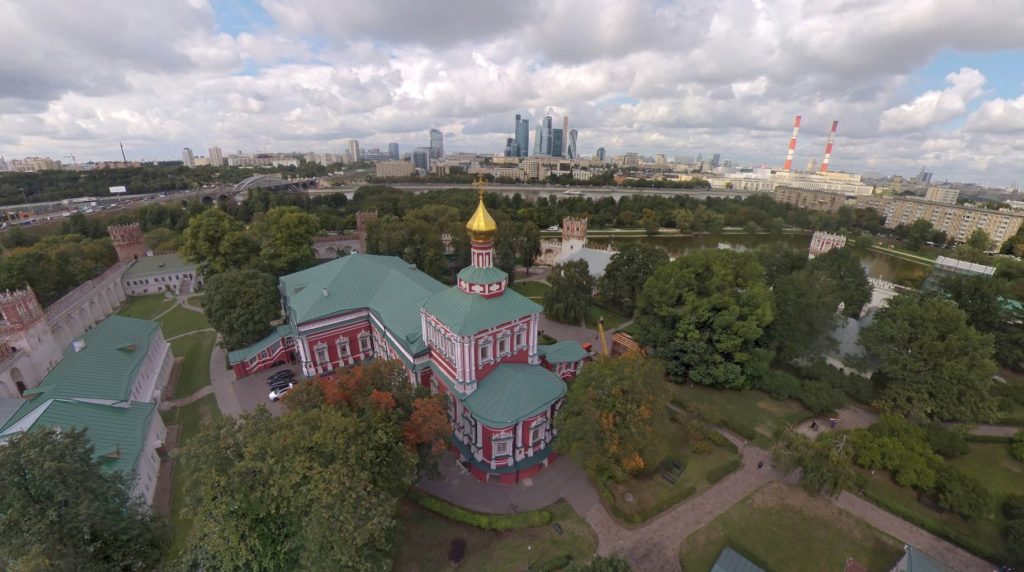 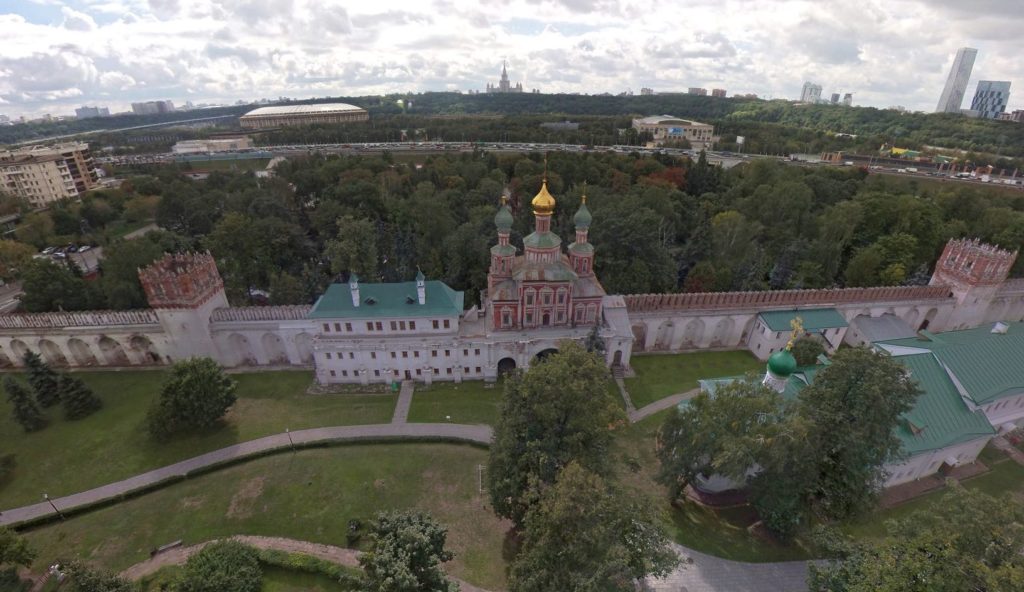 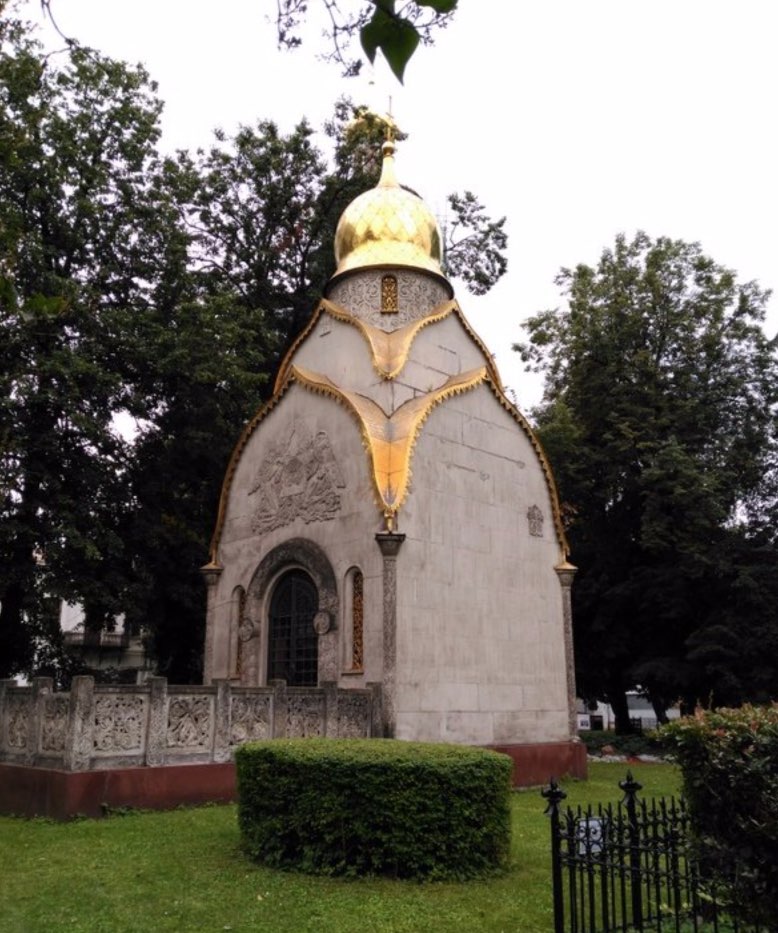 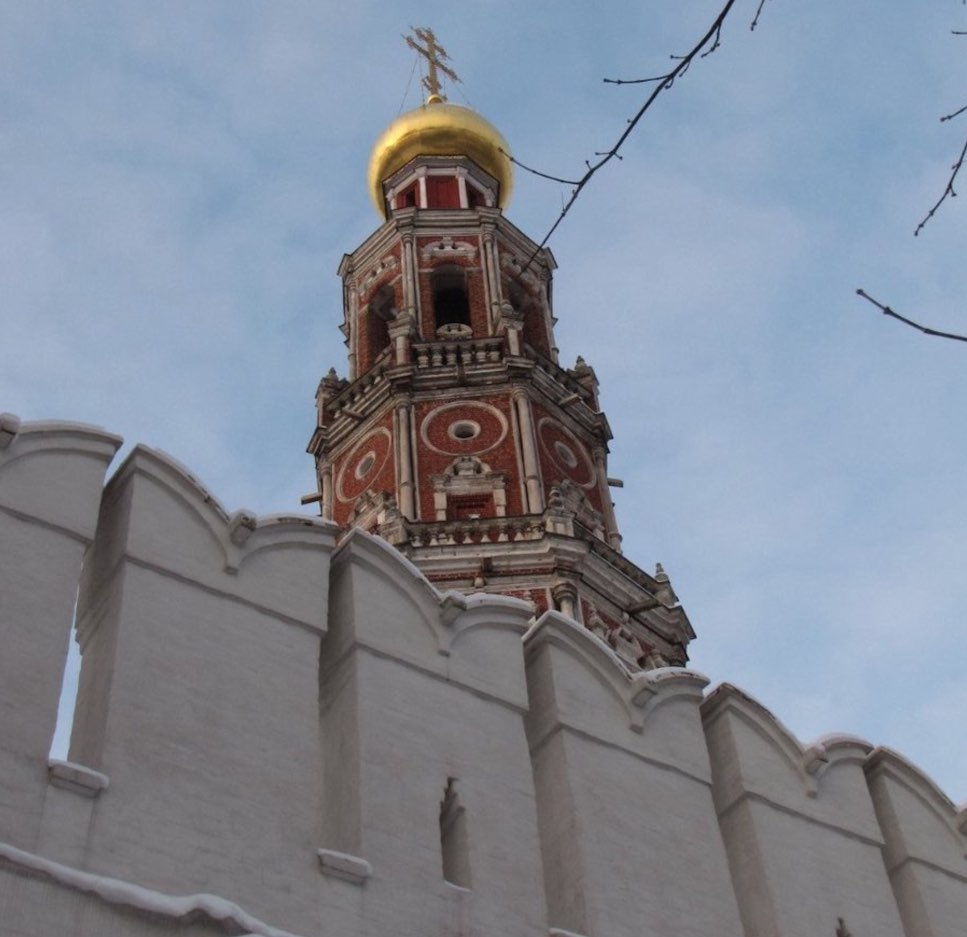 Within the complex you can also visit different museums and exhibitions, which are dedicated to historical figures of the monastery, such as a famous abbess or historical events and religious life, with objects and artistic portraits. These exhibitions of the convent can change places and its contents.

But, above all, it is worthwhile to rejoice in the complex itself for its good state of preservation.

5. The Novodevichy Cemetery, where famous celebrities from Russia rest

It is a sacred space, in which entrance is free (not to be confused with cemetery of the same name in St. Petersburg) where famous celebrities of Russian history are buried from the end of the 19th century to early 20th century, such as musicians, artists, military officer, politicians, historians, scientists or writers, all a pride of the country. Probably the most illustrious cemetery in Moscow.

5.1. The origins of the cemetery and the first funeral

Its inauguration took place in 1898, though it has been a cemetery since 1904. Previously, the burials were made inside the walls of the convent from the 16th century, in the old historical necropolis, usually reserved for royal families, nobles and wealthy people, but initially for nuns and novices.

In 1904, Anton Chekhov was buried, perhaps the first funeral or one of the first celebrities to be buried in the new cemetery. This writer and playwright was one of the greatest exponents of Russian nineteenth-century realism.

At the time of the Soviet Union, the burials were in general of people with a high social status, while in the decade of the fifties of the last century it was surrounded by walls.

Currently it has around 27,000 tombs on 7.5 hectares of very busy land. At the entrance to the enclosure there is a map in Russian in which the most famous tombs can be located. 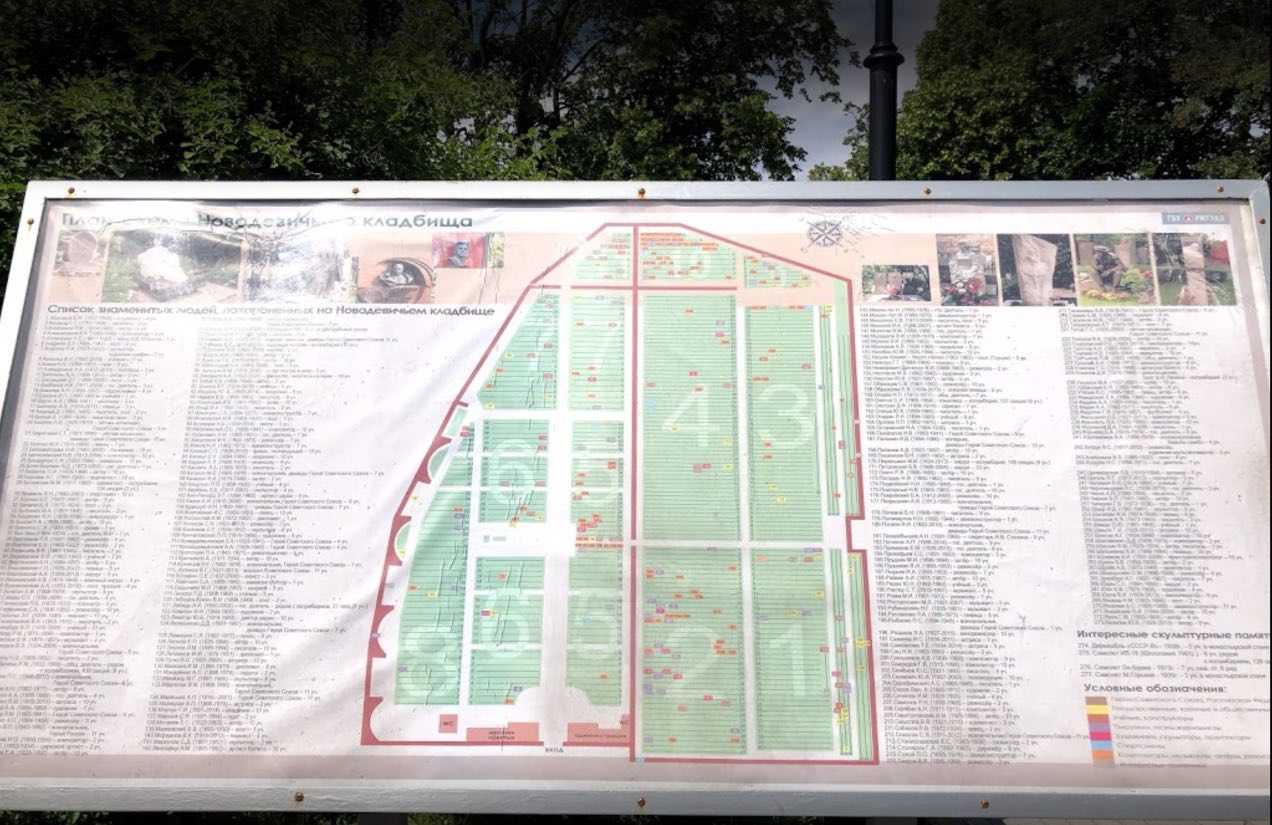 Despite its funerary content, it is a green area with tombs and mausoleums that are authentic works of art and very important sculptural creations, which are always related to the lives of the deceased, such as busts, reliefs, animals, airplanes, and the list goes on, with some notable figures.

5.2. Russian personalities who rest in Novodevichy

Some personalities that rest in this fascinating cemetery are: 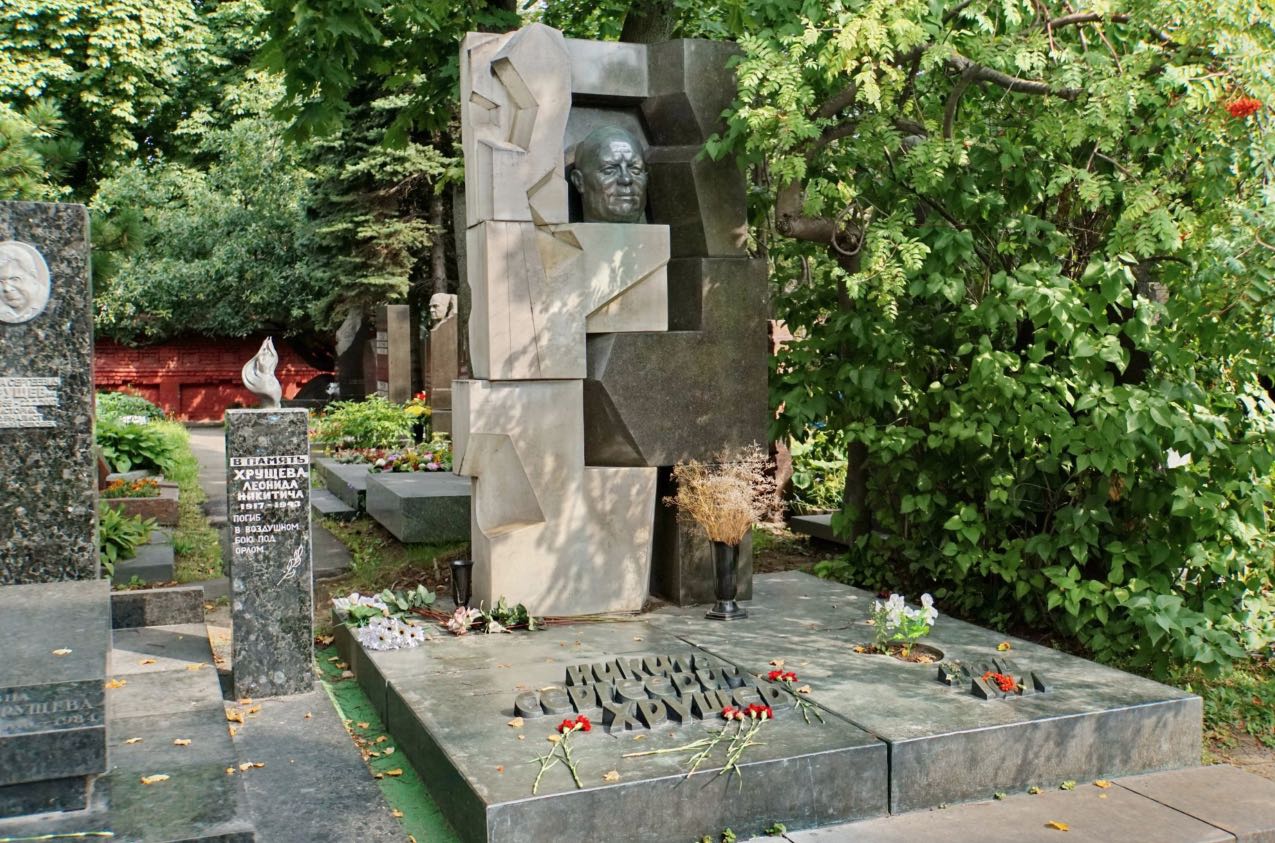 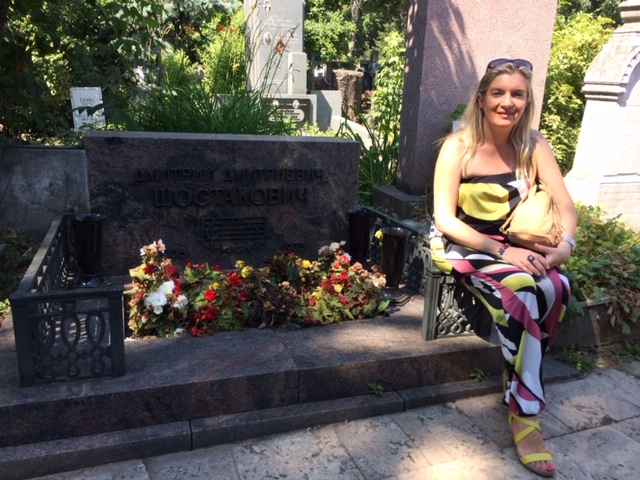 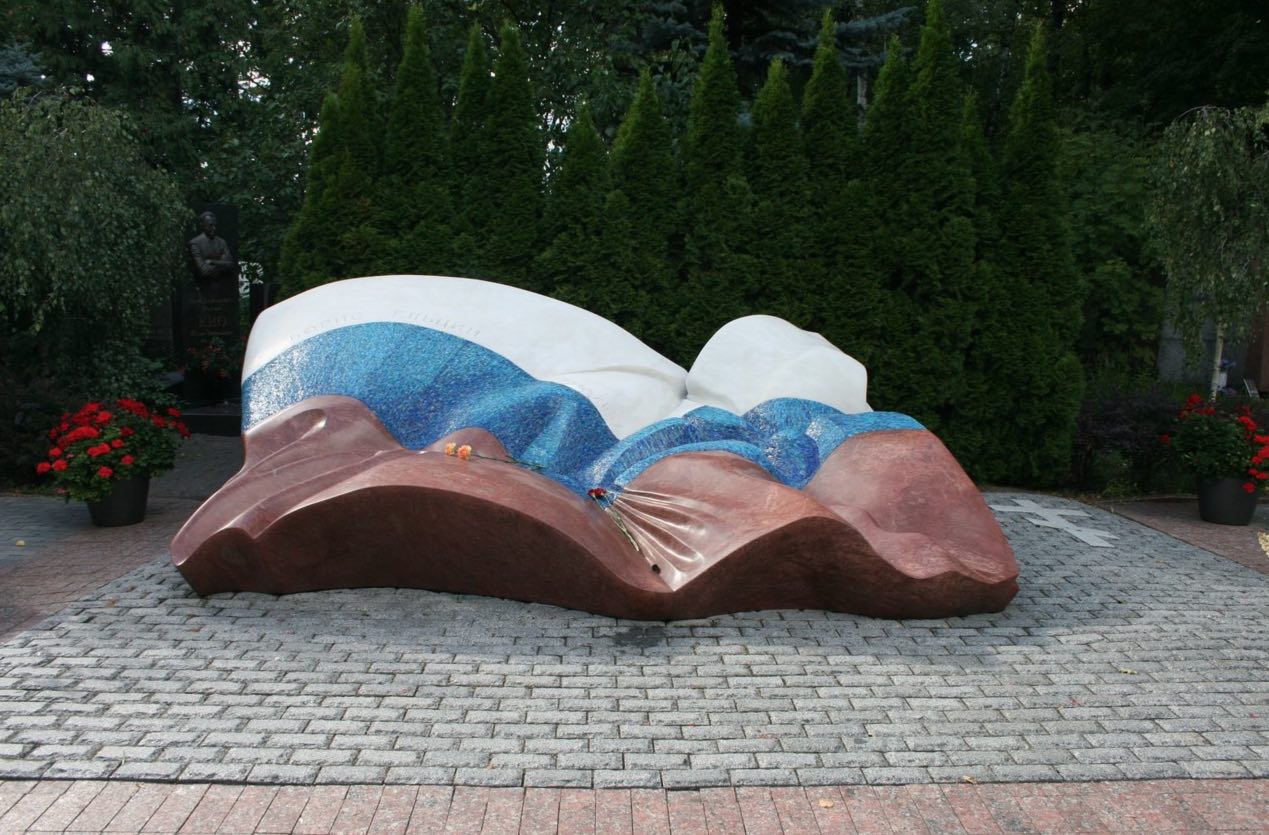 In short, it is a beautiful and melancholy place at the same time, a true open-air museum, peaceful and quiet.

I recommend you visit the website: http://novodevichye.com/ (in Russian), where you can find a complete database with alphabetical indexes and by professions or thematic areas of buried personalities, including photos and small biographies.

Here are the photos of other well-known tombs of the Novodevichy Cemetery, among which you can see other Russian celebrities, such as the World War II pilot, Vitaly Ivanovich Popkov, the poet Vladimir Mayakovski, the wife of Gobarchev (Raisa Gorbacheva), the Russian comedian Yuri Nikulin, the singer Lyudmila Zykina or the Soviet actor Vyacheslav Tikhonov, known for the character of the Soviet spy Stierlitz 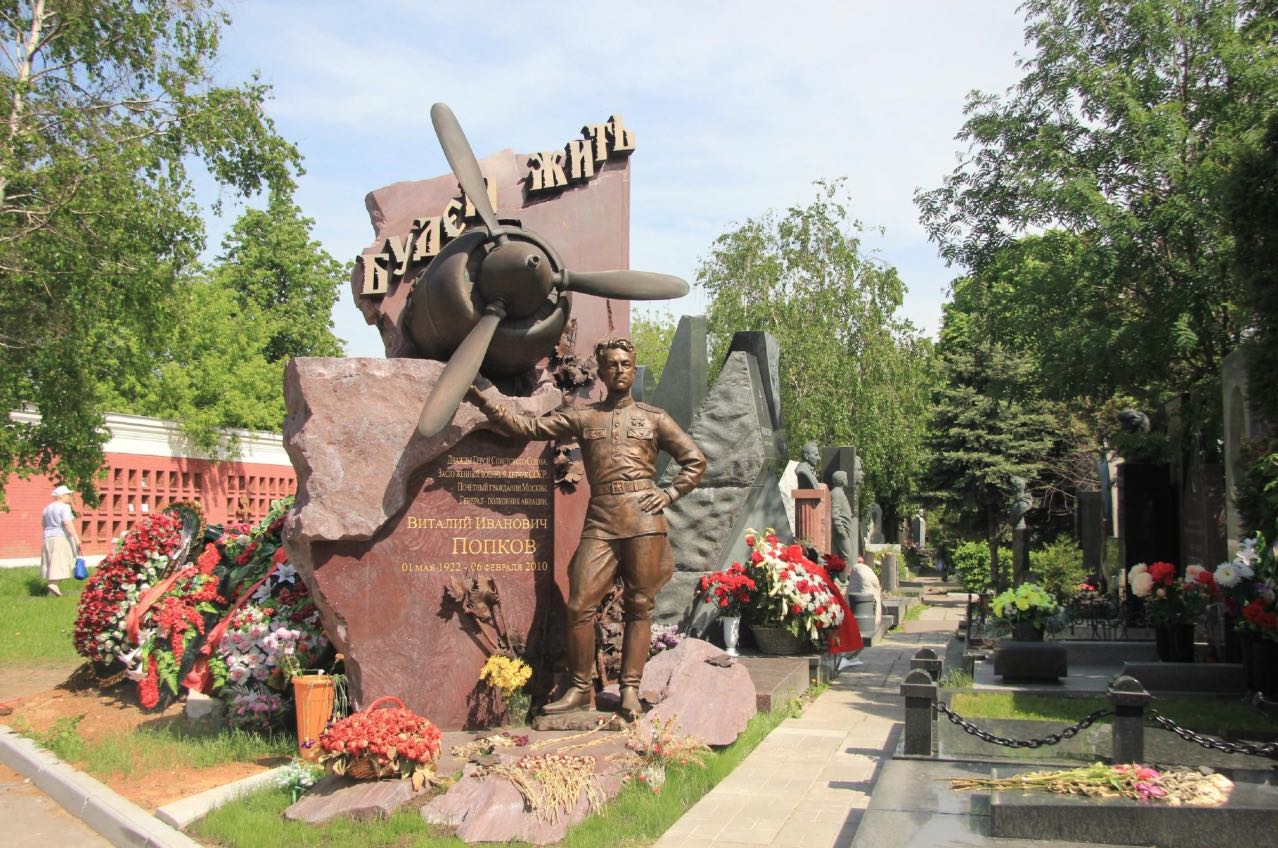 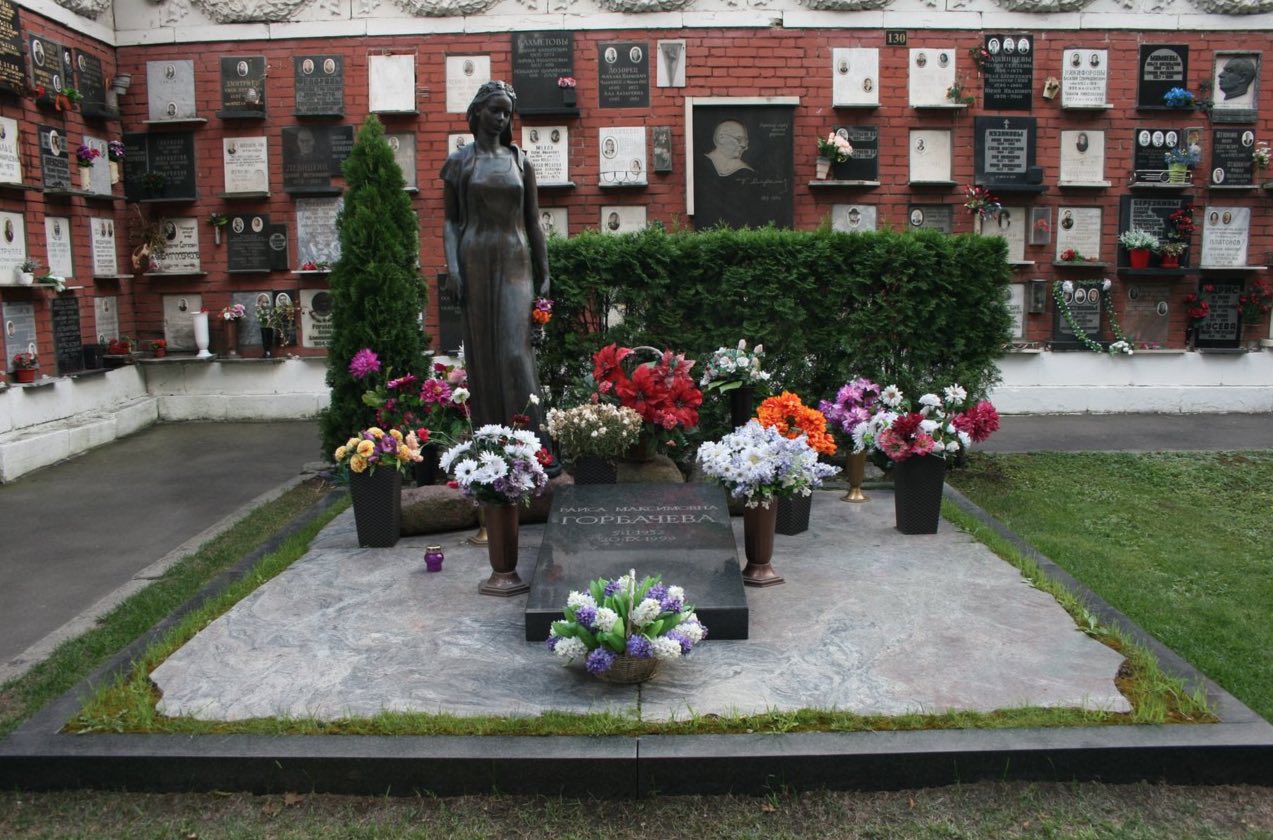 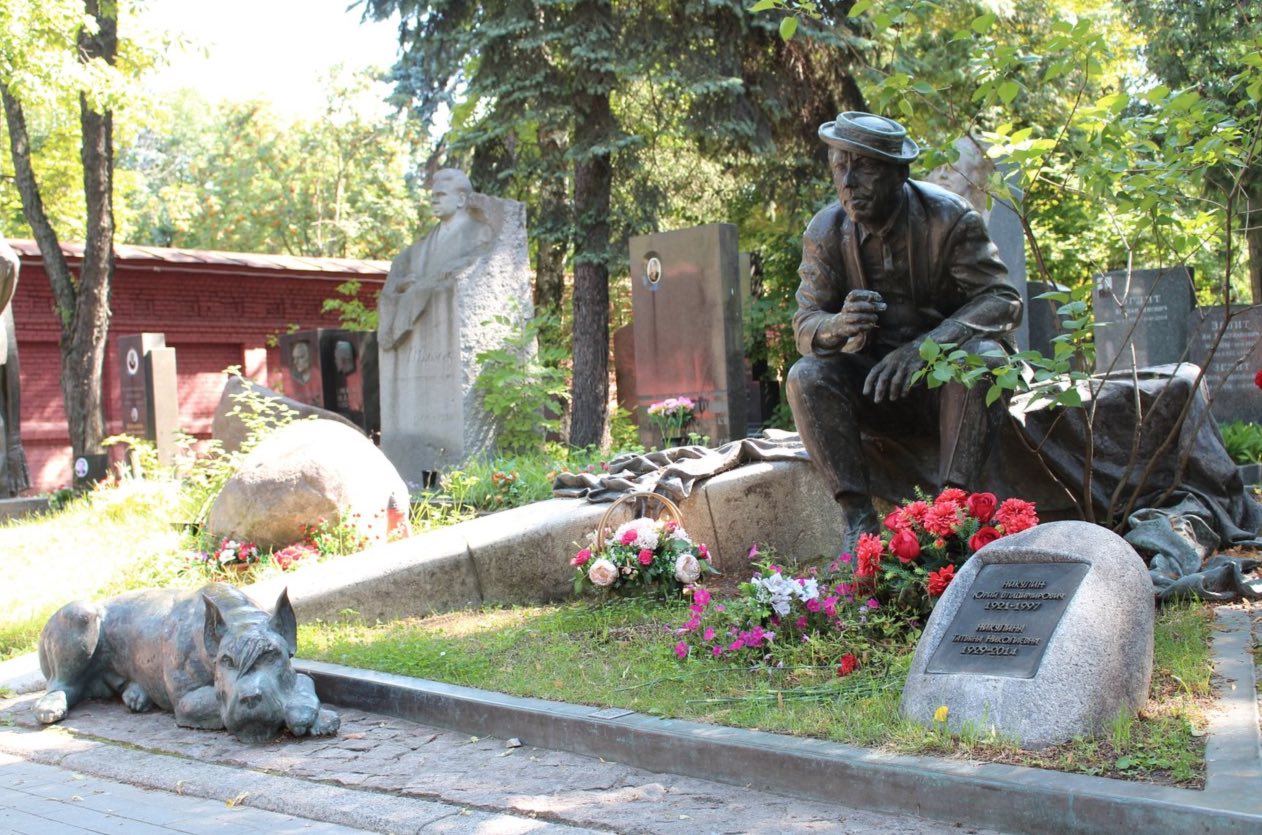 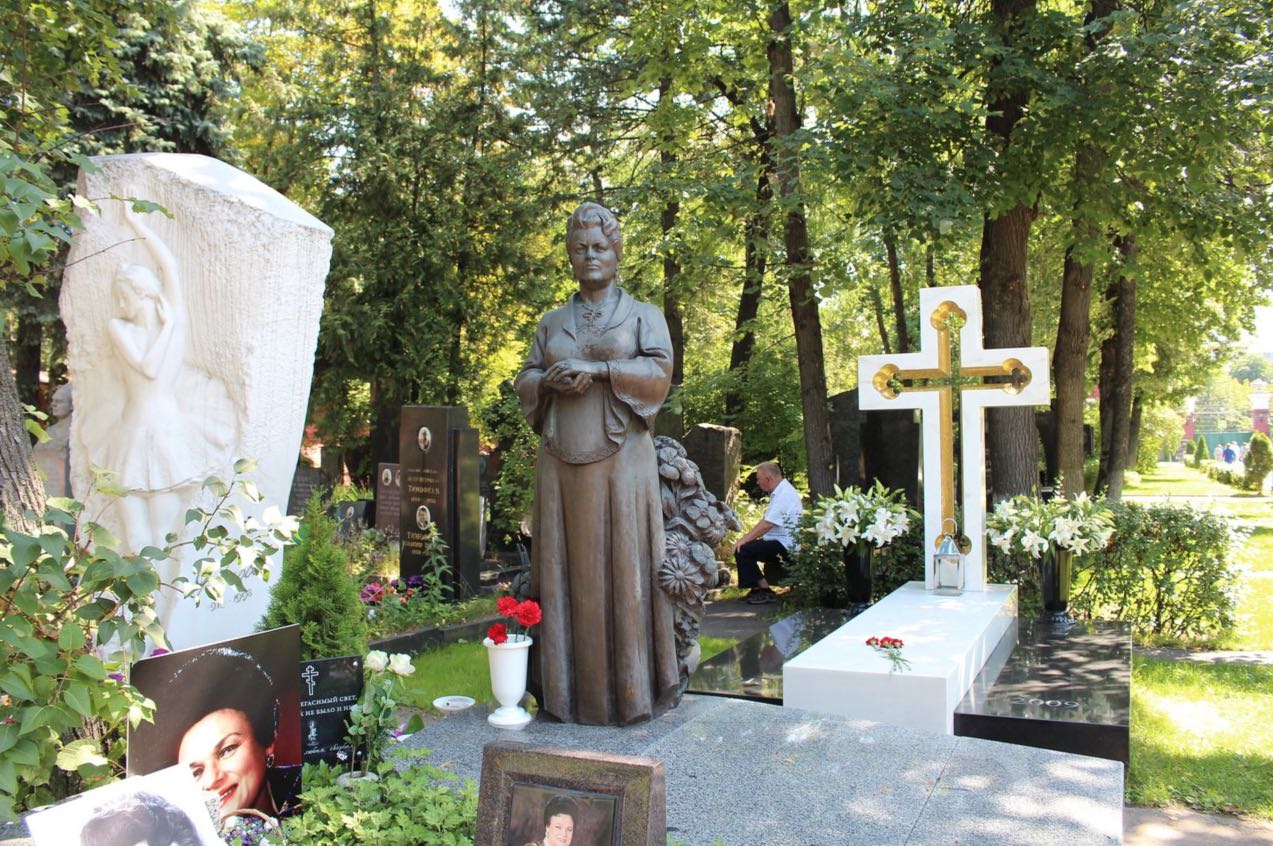 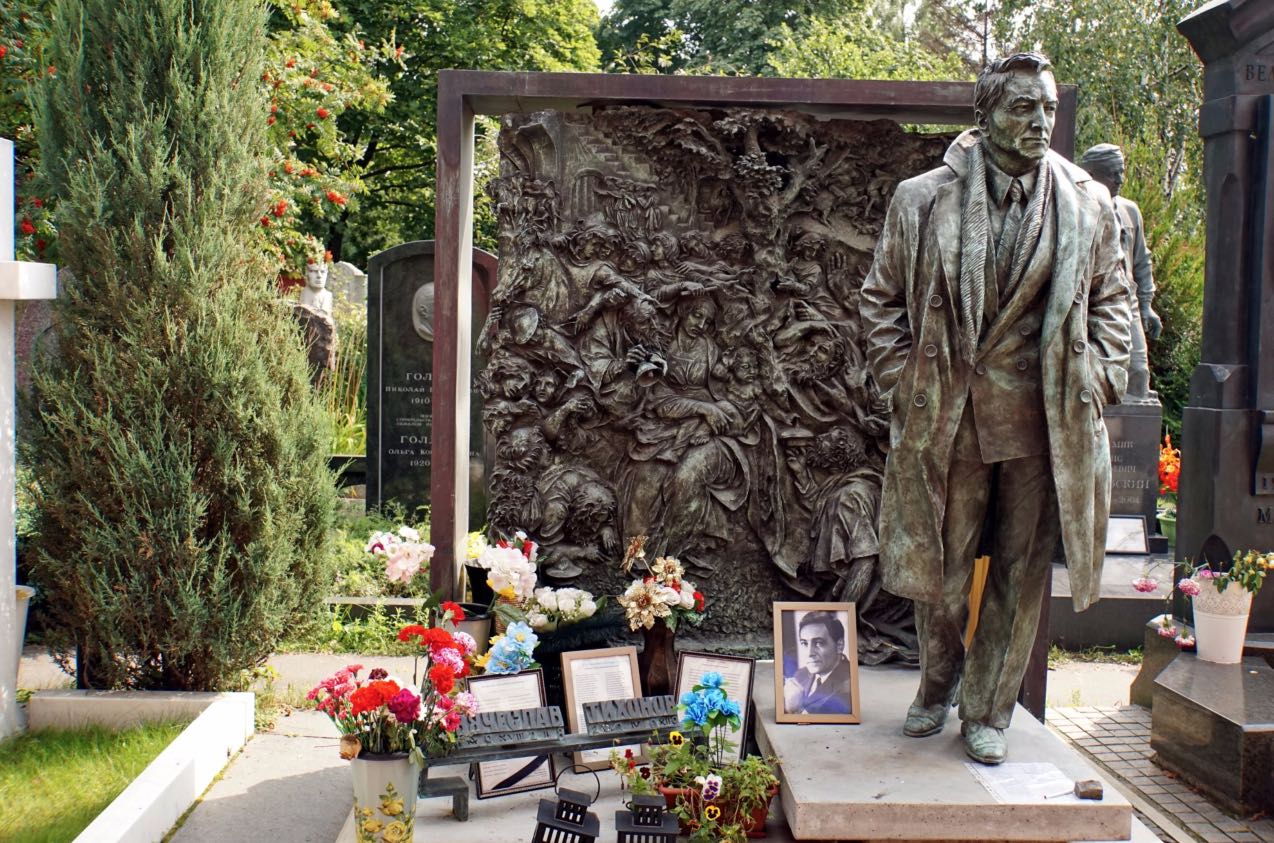 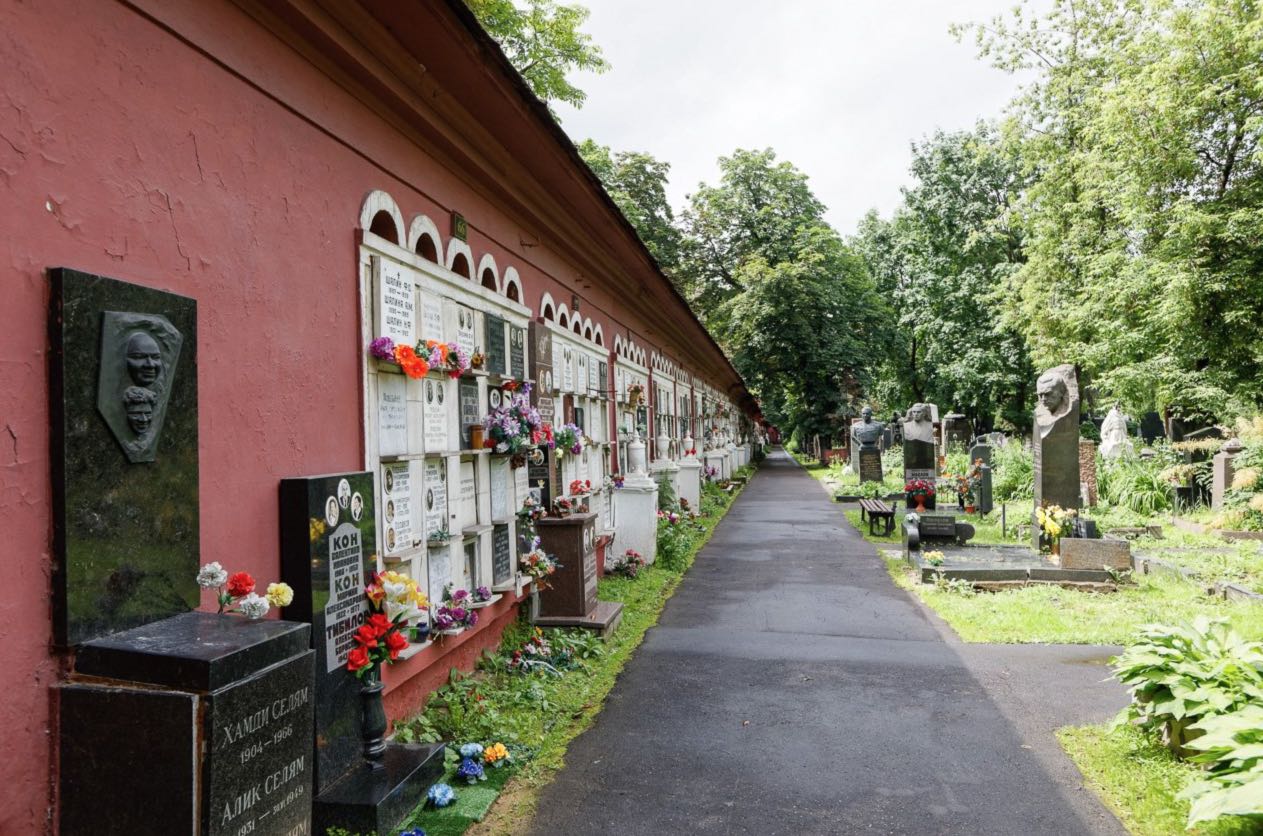 I hope this article has helped you organize your visit to the Novodevichy Convent and Cemetery. Below you can leave your comments or questions.

More than 400 pages with all the information you need to plan your trip to Russia online easily, cheaply and avoiding queues
END_OF_DOCUMENT_TOKEN_TO_BE_REPLACED